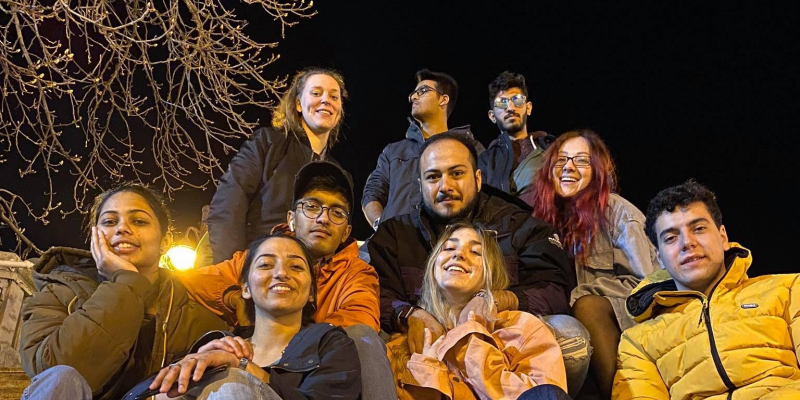 In order to limit the spread of Covid-19, the Government of Latvia decided to suspend international passenger transportation in mid-March. As a result, Erasmus+ mobility participants were forced to choose either to stay in the country where they study within the mobility programme or return to their homeland. Students of Vidzeme University of Applied Sciences (ViA) Egija Ļuļēna, Elīna Krūkle, Krista Barane, Andra Mētriņa, Marianna Smirnova and Ģertrūde Ozoliņa shared their experience.

Taking into account that the Erasmus+ Agency in Latvia (VIAA) determined that the decision on staying or returning is up to each mobility participant, Vidzeme University of Applied Sciences (ViA) contacted ViA students studying abroad in good time and informed about the possible scenarios in an emergency situation. According to the information provided by the European Commission, Erasmus+ activities that are currently suspended, cancelled or transferred in connection with Covid-19 are considered force majeure, which also provides for students returning home and continuing their studies in Latvia via distance learning, but without an Erasmus + scholarship.

Moreover, the present circumstances determine that in case of return, the student does not have to reimburse the scholarship for the period of study and stay abroad, as well as the unforeseen travel expenses in case of return, but the remaining part of the scholarship will have to be returned. Erasmus+ participants informed ViA about the decision made, while inquiring on the support provided by the university if the student has decided to return. At present, two students have returned, while the others continue their mobility abroad.

3rd year students of Vidzeme University of Applied Sciences Egija Ļuļēna and Elīna Krūkle are currently in Portugal and study at the University of Porto. When countries invited their citizens to return home from abroad, both Erasmus+ participants chose to stay in Portugal. "After consulting with ViA, our families and the Consular Department, we decided to stay," Elīna commented her decision. "I think it's safer," said Egija.

"In order to fly from Portugal to Latvia, you have to fly through Italy, England or Germany, and these are currently the countries most affected by Covid-19. If we decided to return home, there would a high chance of getting infected with the virus during the trip. I have to add that at one point we started to consider the idea of returning, but then countries started closing their external borders one by one,” said Egija and added that both girls did not want to miss the current study year because they were worried that it would cause problems in the study process.

Egija shared her feelings, saying that the situation was changing rapidly every day, "There are moments when I long for my family, but then I reassure myself that everything will be fine, three months will pass and we will get home successfully." Elīna, on the other hand, said that she felt like in an emotional carousel. "The fact that there are two of us here is a big advantage, because we support one another and it is not so boring sitting at home!" said Elīna. The students informed that the studies at the University of Porto were organized in the same way as in most educational institutions – lectures take place remotely by using the platform ZOOM. Additional homework and other assignments are given. "Such learning process requires independence. To be able to do everything on time, you have to be very organized. The only downside is that the lectures are mostly in Portuguese and it complicates everything, but we have got acquainted with some Portuguese students who translate some of it," Egija told. The students admitted that they missed home, their dear ones and the nature of Latvia a lot, “but time goes relatively fast and now there are only about two months left."

Krista Barane, on the other hand, is currently studying at the University of Kiel, Germany, but due to the state of emergency in the world, she is now continuing her studies from home in Latvia. "I can’t really say that I chose to return home. My studies in Kiel started at the end of March and there were many holidays, so I came back to Latvia to celebrate my birthday. At the time when I returned home, neither Germany nor Latvia had declared a state of emergency yet and I had not even thought that this could happen. When I was already in Latvia, the situation around the world deteriorated and my flight to Germany was cancelled, the borders were closed. One could say that I am here "involuntarily - voluntarily", because I did not have the opportunity to return to Germany, but I really appreciate the time I can spend with my loved ones, so I am not very upset about it," described Krista.

She admitted that for a while she had been very worried about how things would go and had considered discontinuing Erasmus+ studies, but ViA staff had explained what to do in both cases - if she continued her studies or if she stayed at ViA. "After much thought, I decided to continue my studies in Germany, because once I have started, I have to finish! There is really no difference which school I am currently studying at, because both universities organize distance learning. It's a big challenge because I like going to the university, but studying at home is much harder. I live in the countryside and this spring we are spoiled with sunny, warm weather, so it's hard to force ourselves to sit in the room at the computer. Although - even walls help at home,” said Krista. She was convinced that everything happened the way it should.

But Andra Mētriņa returned home because countries started to introduce travel restrictions and it was clear that the daily mobility of inhabitants would soon be restricted too. "In Latvia, I had a family with two children, so isolation in another country - in my case in France, in Paris, was not an option," said Andra. She revealed that she had followed the statistics of the epidemic closely and had predicted quite precisely when restrictions similar to those in Italy would be introduced in France, first of all, with regard to the closure of educational institutions. "I contacted ViA International Office, but I took the decision to return on my own - when my university in Paris switched to distance learning," said Andra.

On the day when Andra was already at the Paris airport for one of the last direct AirBaltic additional flights to Latvia, closer cooperation with ViA employees was established. "From the relationship perspective, it was nice, of course, but I expected ViA to provide the feedback and communication on what I should do sooner, but I understand that we are each responsible for ourselves, especially when going for studies further from home," said the student.

Andra is currently pursuing distance learning at her Paris university using Microsoft Teams, Skype and other media platforms. “It is very difficult to study remotely, especially at a foreign university, because study projects are groupwork. At the university in Paris, tasks is the study method used. We didn't have lectures at all, we learned from each other. At times when there were problems with programming, we could turn to academic advisors. Although such possibility is provided also remotely, I don’t know how to use it because I can't explain the problem. Individual tasks are not complicated, but groupwork and larger programming tasks are hampered a lot,” Andra commented on her situation. She believed that the study process was completely disrupted, and universities, possibly, needed to adapt the tasks to such a situation. She was confident that she would return to Paris as soon as on-site studies resumed.

Marianna Smirnova and Ģertrūde Ozoliņa are 2nd year students of “Tourism organization and Management” study programme at ViA – students with a positive mindset as they say about themselves. "We discussed and realized that it is safer to stay here in Hungary. There are all the conditions for good living and studies continue online. We feel at home here – friends are close and a pleasant environment. We have dreamed about Erasmus studies for so long that now it does not seem wise to give up, and we don’t know whether such an opportunity would be given again,” said the girls.

They described that the schedule of lectures had not changed and the lectures took place at the usual times. “Seminars and presentations of assignments take place by calling online, while we have to learn the theory ourselves. Some teachers also offer the opportunity to meet them for extra lessons. If there is an internet disruption or something is not clear, the teachers are responsive and repeat what was said again, or write a separate e-mail. In one of the subjects we were divided into several groups, using an individual approach and talking to each of us individually, assessing our level of knowledge,” said Marianna. Both students revealed that they were not longing for home at that moment. "Now we feel at home in Hungary! Of course, we miss family and friends, but there is not much time left for us to linger on it, and we can always communicate with the family using modern technologies," said Ģertrūde. But there was a problem with postal services.

"We had planned to receive a package from home with the necessary things and summer clothes, but the postal service is not working and there is no such possibility at the moment. Being here, we observed that most Erasmus students have returned home, simply because there was too much pressure from families who worry about the safety and health of their children. However, we managed to agree with our families that staying here is the best and safest solution at the moment,” said the girls.