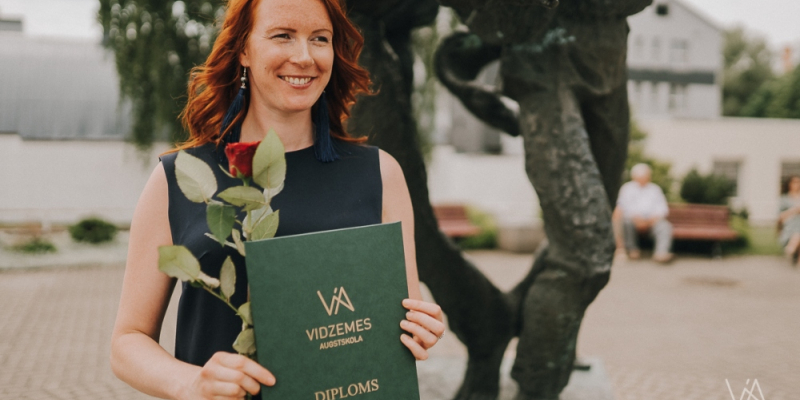 National Anthem of Latvia as a Communication Tool

The national anthem of Latvia is an integral and important part of the nation, but there is a lack of common understanding of the anthem in the society. Within the study programme “Strategic Communication and Governance” at Vidzeme University of Applied Sciences, the student Agnese Geduševa explored the national anthem of Latvia as a strategic communication tool from the point of view of the state elite and individuals of the nation.

“In order for the state elite to consider and “operate” the national anthem as a strategic communication tool, it must understand what the Latvian national anthem means to individuals in the society and their attitude towards it. Therefore, the anthem is both an object of research and an indicator by which individuals express their attitude towards the country, its history, thus acknowledging relations with the country and keeping the historical and collective memory “alive”,” commented Agnese Geduševa.

From one point of view, the national anthem seems self-evident - it is a common, ritual practice at certain events and moments, but the author of the study is convinced that such practices hide a certain code determined by mechanisms based on the existence and succession of the state.

"Personally, I do not believe that we sing the national anthem because it is prescribed by law. This is also confirmed by the results of the research, current discussions in the mass media and other sources,” said the graduate of Vidzeme University of Applied Sciences, adding that the anthem is a topic that never loses its relevance. "People who sing the anthem share the common awareness that the national anthem has also been sung by their ancestors. The anthem is more than 100 years old and was sung before it was officially declared a national symbol. It is a symbolic power that at times cannot even be explained,” said the master student.

The results of Agnese Geduševa's research show that a positive attitude towards the national anthem of Latvia mostly indicates a positive attitude towards the country, however, it is important how individuals interpret the state and in what context they talk about the anthem. The relations between the state and the society also play an important role, which, when discussing the anthem and its significance, highlights certain problems in the country –  the relations and coexistence of the Latvian and Russian communities can be mentioned as one of the most important.

“The most interesting thing, in my opinion, is that the Latvian national anthem is a catalyst for discussions among individuals on various problematic issues in the society and the country. Namely, when speaking about and discussing the anthem, individuals discuss both the ambiguous relations of the Latvian-Russian community, their understanding of one another, and the collective memory of the nation, and the attitude of individuals towards the country and other aspects worthy of separate research,” emphasized the author.

In author’s opinion, it is also interesting that the attitude of individuals towards the Latvian national anthem as a strategic communication tool or as a symbol of history and culture mainly depends on what the country means to individuals and their primary associations of it. "More often individuals associate the country with a specific, geographical place and its values (nature, people, traditions) than with the state as an institution. Of course, the context of the discussion is also important,” added Agnese Geduševa.

The study has also confirmed that the Latvian national anthem is one of the ways to maintain and strengthen collective and national identity, including collective memory, which in the framework of strategic communication is also a kind of strengthening relations with the state. In the context of this study, the ambiguous understanding of the Latvian national anthem is one of the reasons that indicates the unstable and divided collective memory of Latvia and understanding of the past among different ethnic and other groups of the society.