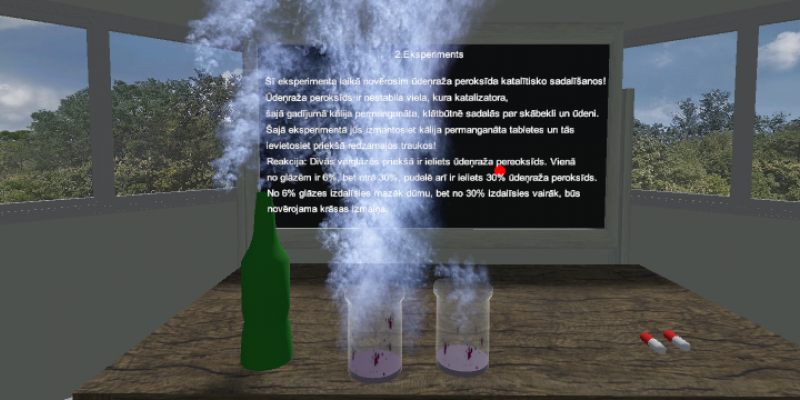 While developing his bachelor’s thesis, Uvis Ziepnieks, a 4th year student of the study programme “Information Technologies” of Vidzeme University of Applied Sciences (ViA), has developed a chemistry experiment simulator in a virtual reality (VR) environment, which can be used in chemistry classes and extracurricular activities in primary and secondary schools.

"It's a virtual reality programme that allows doing laboratory work. The idea for the chemistry experiment simulator came about thanks to a relative who is a chemistry teacher," explained Uvis.

The aim of the bachelor's thesis was to create a chemistry experiment simulator that would be interactive and educational, and could be used to perform experiments that would otherwise be considered too dangerous to be performed on-site. Uvis carried out research and concluded that currently there was no such product on the Latvian market, similar products were available only in English.

The student admitted that he had consulted with his bachelor's thesis adviser Lauris Taube, but for the most part the development of the thesis had been independent. The most difficult stage was the beginning of the work.

"I had an idea, but my experience of working with virtual reality was small. I gained some insight by participating in the VR/AR Hackathon organized by ViA, but we worked as a team there, so the process was easier. Working individually is a completely different thing, but I want to develop something useful and practically applicable,” added Uvis.

When thinking about the further promotion of the product in the market, Uvis admitted that the largest target audience was educational institutions. Virtual reality has been evolving very rapidly over the last decade. Not only the VR technology and quality have improved, but also the ways in which it is used. The student acknowledged that VR had long been not only entertainment, but also a new way to gain knowledge and experience unprecedented emotions.

“During the development of the bachelor's thesis, I planned to test the simulator in several schools, but due to the emergency situation educational institutions are closed, everything is organized remotely and the testing was not possible. Nevertheless, the lecturers and also the adviser encourage me to be persistent,” said Uvis.